On a scale from Tinkerer to Instruction Follower, I’m severely the latter. I do believe that anyone and everyone is a maker, but I’m the kind of maker who can make anything as long as I have a set of directions. Sewing pattern? I can assemble a new dress. Recipe? Boom, I have scratch-made cinnamon rolls a day later. Walk me through writing code? Sure, I’ll make that robot solve a maze ASAP. 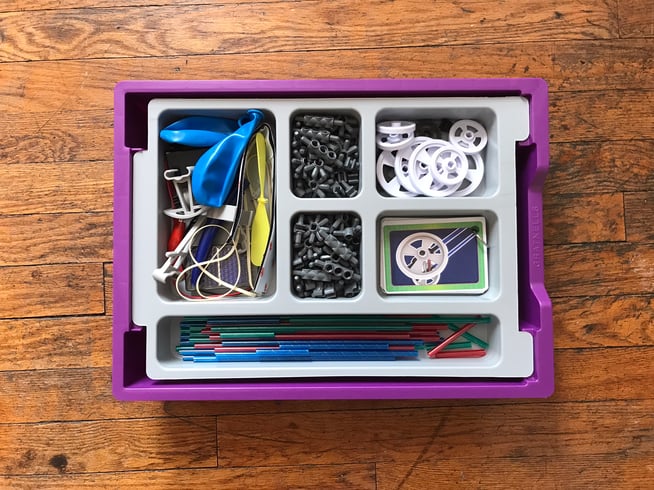 That being said, when I decided to try out STEAM Builder Bin, Pitsco’s newest set for Grades 3-8 to practice the engineering design process, I was a little unsure of how it would go. You see, I struggle with starting with a blank slate, and one main difference between STEAM Builder Bin and most of Pitsco’s other products is its open-endedness – the bin includes a bunch of components that can be used to build any creation your heart desires! However, no step-by-step instructions are to be found. Instead, there are only brief descriptions of the components.

I also tend to gravitate more toward the arts, emotion, and how something affects the senses – music, the way something looks and feels, storytelling, and so forth. These are things that don’t typically align with the traditional definition of STEM, and I knew from the get-go that STEAM Builder Bin is very much rooted in, well, STEM.

But I didn’t have to fret for long! STEAM Builder Bin may not have explicit directions, and it may focus on engineering, but it has a whole deck of Idea cards that provide a gazillion starting points AND, of course, make room for the arts in STEAM! I wouldn’t have to start a creation from nothing, nor would my tendency to the arts go to waste. Knowing all of this, I started to feel empowered.

So, I started by browsing the Idea cards, as anyone probably should, to get a feel for what my build options could be. There are lots of topics, such as Physical Science, Reading, or Amusement Park, and each topic has three difficulty levels: Apprentice (easy), Master (medium), and Legend (hard). 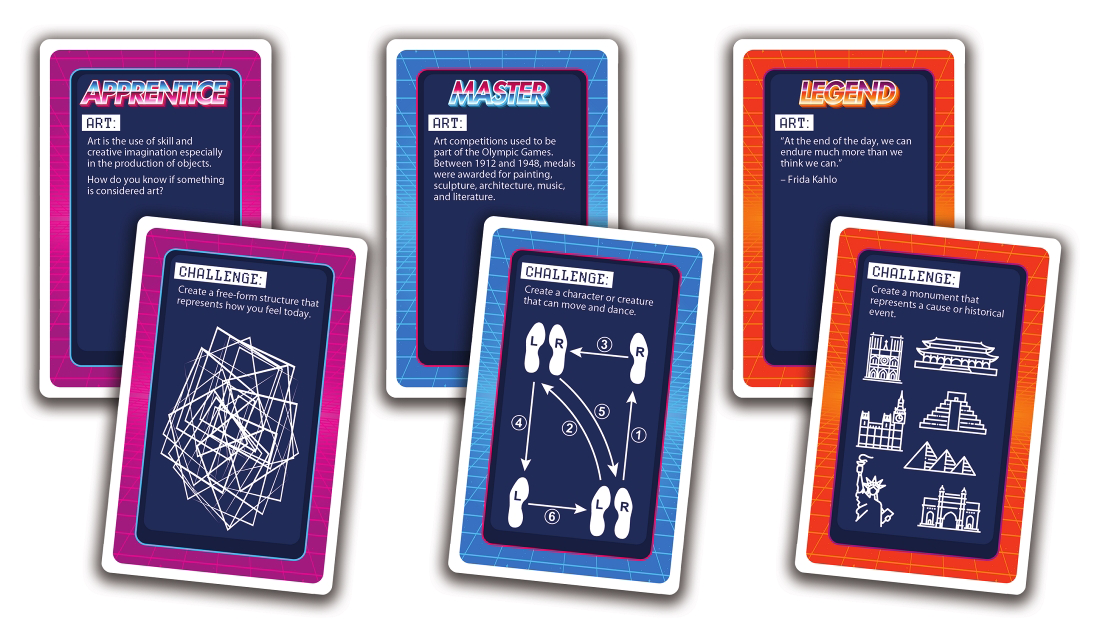 Like I said, I was feeling empowered, so I picked a Master-level card from the Art theme. One side gives a little background on the topic, and the other provides the prompt for the build. Here’s mine: 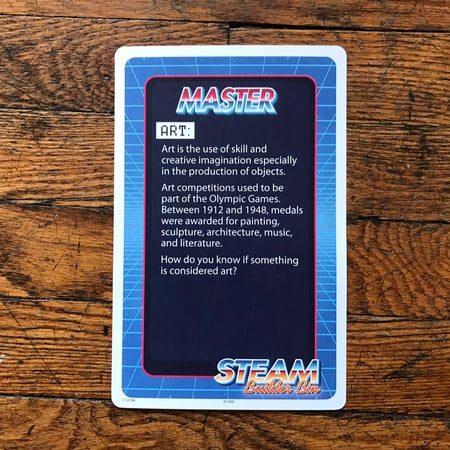 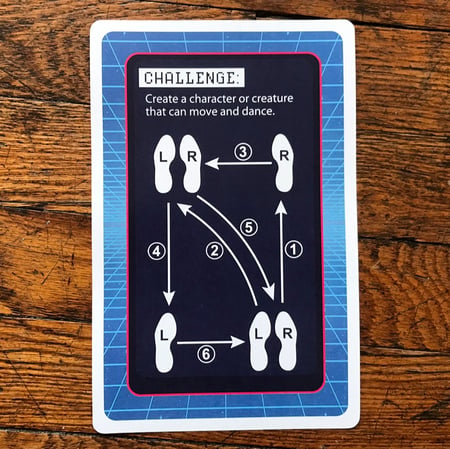 I considered the question, “How do you know if something is considered art?” before diving into engineering my build. I tend to think of art as something made by someone who finds their creation beautiful – whatever that means to them. Of course, my immediate follow-up thought was to wonder if I could find beauty in the challenge I chose: Create a character or creature that can move and dance. 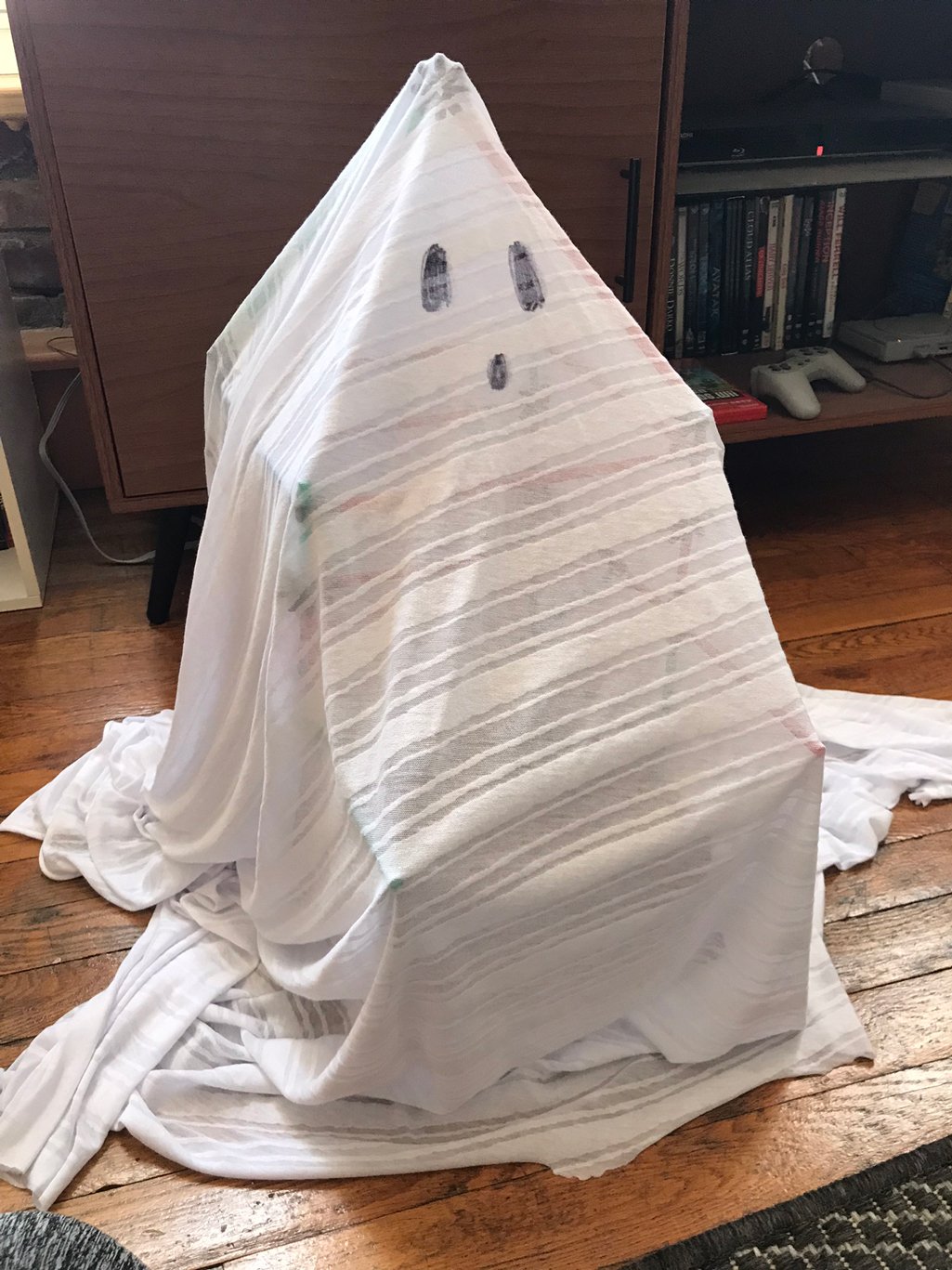 I figured I could design a base structure and throw a sheet over it, making a wobbling, dancing ghost. I drafted a couple quick designs on a piece of paper and settled on a house-looking base, which would make room for arms somewhere and a head for my ghost.

Long story short, this challenge proved to be difficult for me. It was a snap to assemble my base structure – the STEAM Builder Bin pieces are easy to put together and take apart over and over, which, thank goodness for that because I did a lot of disassembly throughout the process. A couple of my main problems that I ran into over the course of the build included: 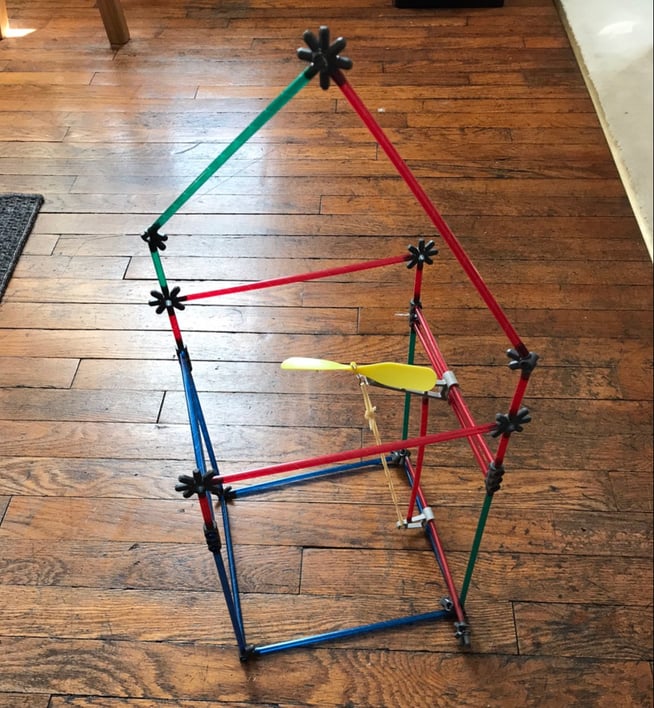 But I refused to give up or switch to another challenge! In the end, I managed to attach a swinging arm to each side of the structure, and then I connected them with a rubber band rig, so rotating one arm would also rotate the other. Thank you, friction! And finally, throwing the sheet over the base structure and adding a cute face was definitely the easiest, and most artful, part of the whole challenge. I still stand by the fact that I’m an avid Instruction-Follower maker, but I’m so proud of my persistence and my little dancing ghost! What kind of maker are you? What dancing creature would you make with STEAM Builder Bin? Let me know in the comments.

It takes a lot of organization and detailed work to be the marketing projects coordinator at Pitsco, but it’s what I do best, and I love what I do! I also love learning new skills, especially when it comes to crafting and cooking, and it’s my plan to visit all 50 United States before I turn 35. Wish me luck!