Science teachers and the next generation of American scientists and inventors filled the halls of the America’s Center Convention Complex in St. Louis earlier this month. The NSTA National Conference hosted more than 300 exhibition booths specializing in disciplines from traditional life and physical sciences to makerspaces and rocket kits. By far the most astounding thing was the representation of coding on the exhibit floor.

Robotics, engineering, coding, and so on aren’t new to K-12 classrooms or NSTA exhibit halls, but they’ve historically been more or less a niche specialty. However, 2019 marks the first year NSTA has included Computer Science as a Discipline Category and Robotics as a Product Category for exhibition booths.

This is the second year that Girls Who Code has attended and the first year for Code for Teens and Microduino. In addition to their own proprietary products, exhibitors that didn’t traditionally specialize in robotics or coding featured related partner kits at the conference.

And then there were companies like Little River Research & Design, who showcased a geomorphological simulator that was managed by an Arduino controller and open source code. Another kit I was introduced to was a hydroponic kit customizable with code.

As Heard from Educators

Our own TETRIX® Mr. Robot II attracted quite a bit of attention to our booth. He posed for dozens of photos, sported a Dr. Zoon look, and met up with kick-starter MOREtech’s humanoid bot! More importantly, Mr. Robot sparked conversations with many visiting science teachers – well, not literally. But the conversations had a resounding theme – “Our administrators want me to create a robotics/coding program and I’m looking for ideas. . . .” One librarian shared that she was charged with creating a makerspace for their library center.

We’ve seen this trend rising in the last few years and love to support this type of addition. Makerspaces in the library create great opportunities for cross-disciplinary education and applications and often mean greater access to all students. We’ve also had a number of elementary educators inquiring about beginning hands-on coding with young learners. Screen-free and TagTile®-based KUBO is a great fit for developing an early understanding of coding. 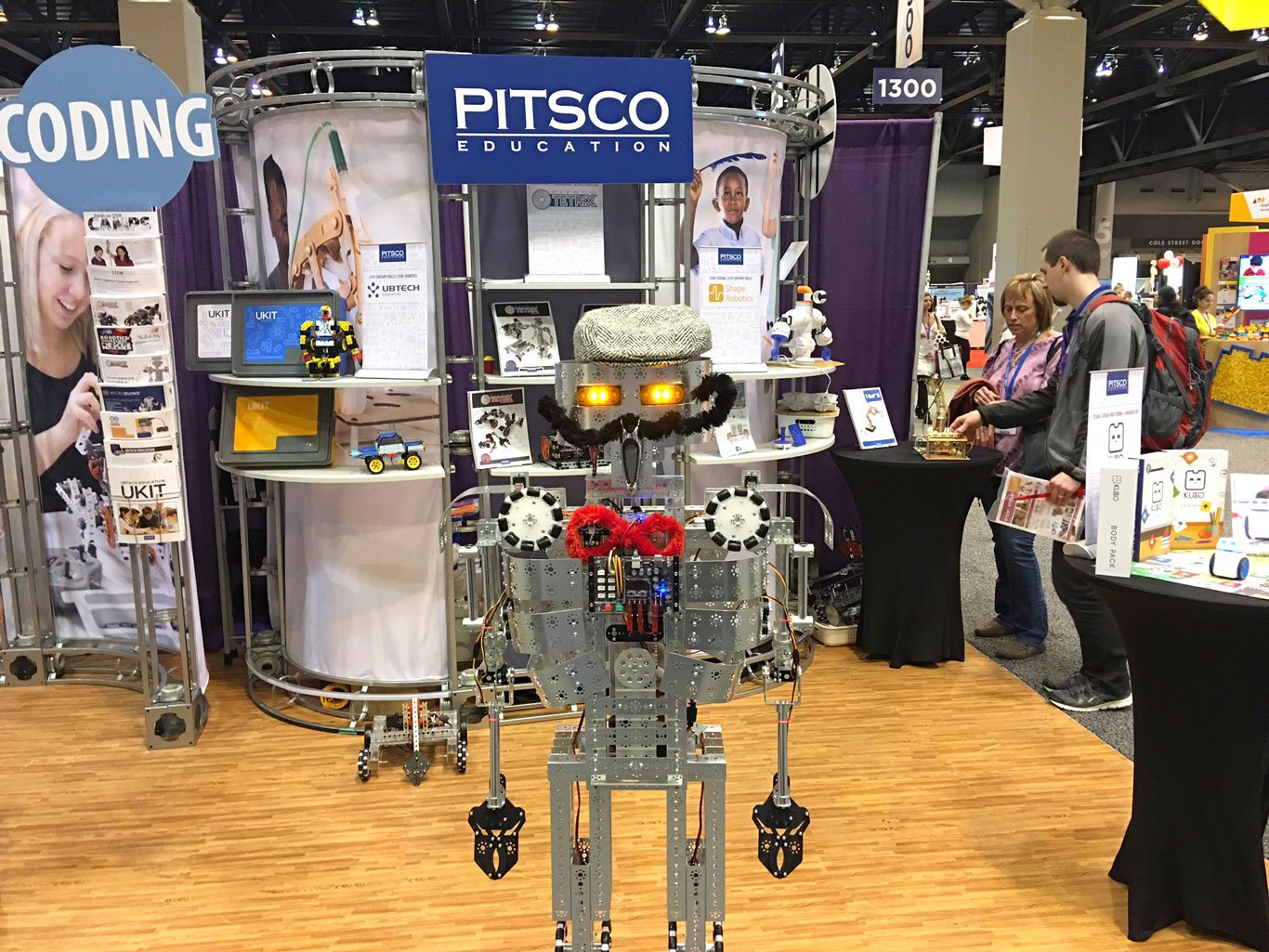 Among teachers who were new to either coding or robotics, there seemed to be a subtle partition between the two subjects. Several teachers were all about Code.org or ScratchJr, while others were asking about competitions and mechanical performance. We’re a longtime believer in the hands-on, minds-on approach where coding and robotics, while great individually, are even stronger together. It was awesome to share our full K-12 continuum of coding and robotics. We work hard to provide what educators need. For example, our new TETRIX MAX Tele-Op Control Module enables coding on top of the traditional R/C experience. Our partner kits from UBTECH, Shape Robotics, and Microduino all teach mechatronic and coding aspects using a Blockly-type interface.

NSTA 2019 featured more external sessions than any one person could attend. Speakers talked about how to incorporate project-based learning into their science classrooms and electronics and engineering concepts into their core subjects with manipulatives and kits. We were excited to see award-winning science teacher Carrie Wilson Herndon share her experience implementing robotics in nature and agriculture with her students. She’s written an EdSurge article about using TETRIX PRIME kits to solve real-world problems and has also served as a member of Pitsco’s Teacher Advisory Group (TAG). 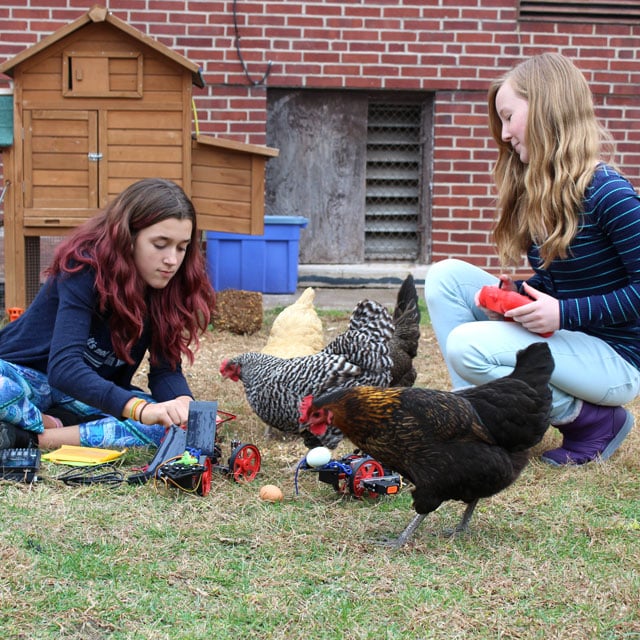 With such an increased footprint at NSTA, it might seem that traditional science is being overrun by computer science and coding, but that’s only partially true. What comes to mind is Next Generation Science Standard’s commitment to “integrate engineering design . . . to the same level as scientific inquiry.”

Now students aren’t expected to only learn about how the world works; they’re expected to design, implement, and optimize solutions for specific problems. And while there are many ways to go about this, coding and its overarching computational-thinking philosophy synergizes really well with the engineering process. I’m certain what I saw and heard at NSTA is science education’s next generation response to coding. 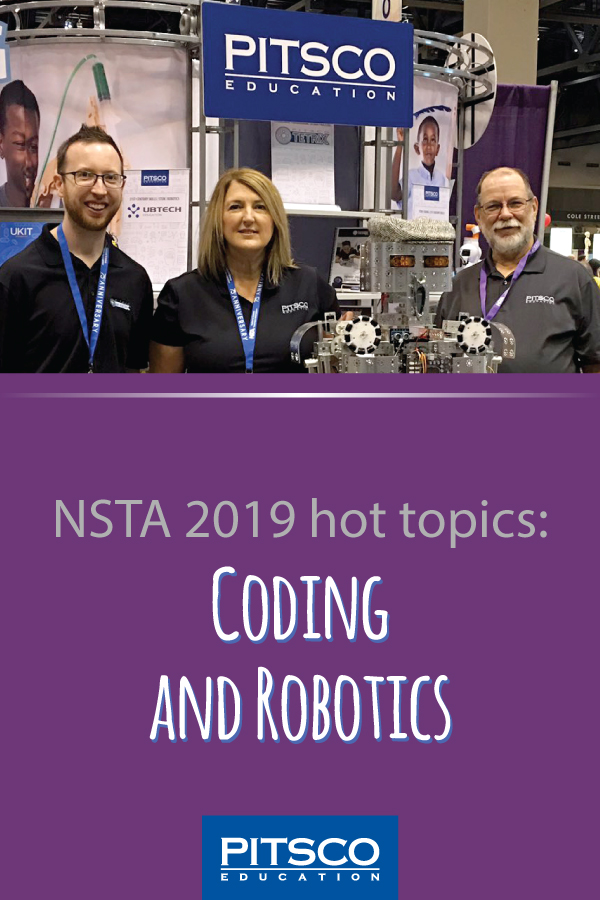