Greek legend has it that when the town of Marathon was invaded by the Persians many, many centuries ago, they outnumbered the Greeks four to one (Awesomestories.com). A soldier named Pheidippides ran 150 miles to ask the Spartans for help, only to be turned down. He ran back to the front lines, where he battled victoriously. He then ran a final 25 miles to Athens to utter “chairete, nikomen,” translated as “hail, we are the winners,” and then he died from exhaustion (Ridetothehills.wordpress.com). Coincidentally, the source of the word telephone’s etymology is Greek, meaning a far sound or voice. If anyone could have used a far voice, it was Pheidippides. April 25 marks National Telephone Day, and what better way to celebrate than by taking a moment to appreciate how far we’ve come with our “far voice.”

Making a Lot of Noise

When it comes to distant communication, our predecessors ran the gamut from couriers, smoke signals, musical instruments, flags, and semaphores. In 1844, Captain John N. Taylor of Britain’s Royal Navy invented a far-reaching noise-emitting device. His signaling trumpet-type device enabled communication at sea. Although this was nothing more than a fancy foghorn, it became known at that time as the telephone (Todayinsci.com).

Taking it Down to the Wire

But a telephone wasn’t just a big noisemaker. The first speech-transmitting device akin to our modern telephone was invented in the late 1800s, owing much of the credit to telegraph and copper-wire transmission – something we still use today. History points to Alexander Graham Bell as the inventor, but that story is shrouded in conspiracy. Antonio Meucci, an Italian emigrant in the US, couldn’t patent his teletrofono in 1871 because he couldn’t afford the $250 processing fee (Theguardian.com), and then his equipment went missing. Five years later, inventor Elisha Gray competed with Bell for the patent, but he lost because his own submission was received two hours after Bell’s. Interestingly, all three men had nearly identical designs (Loc.gov). 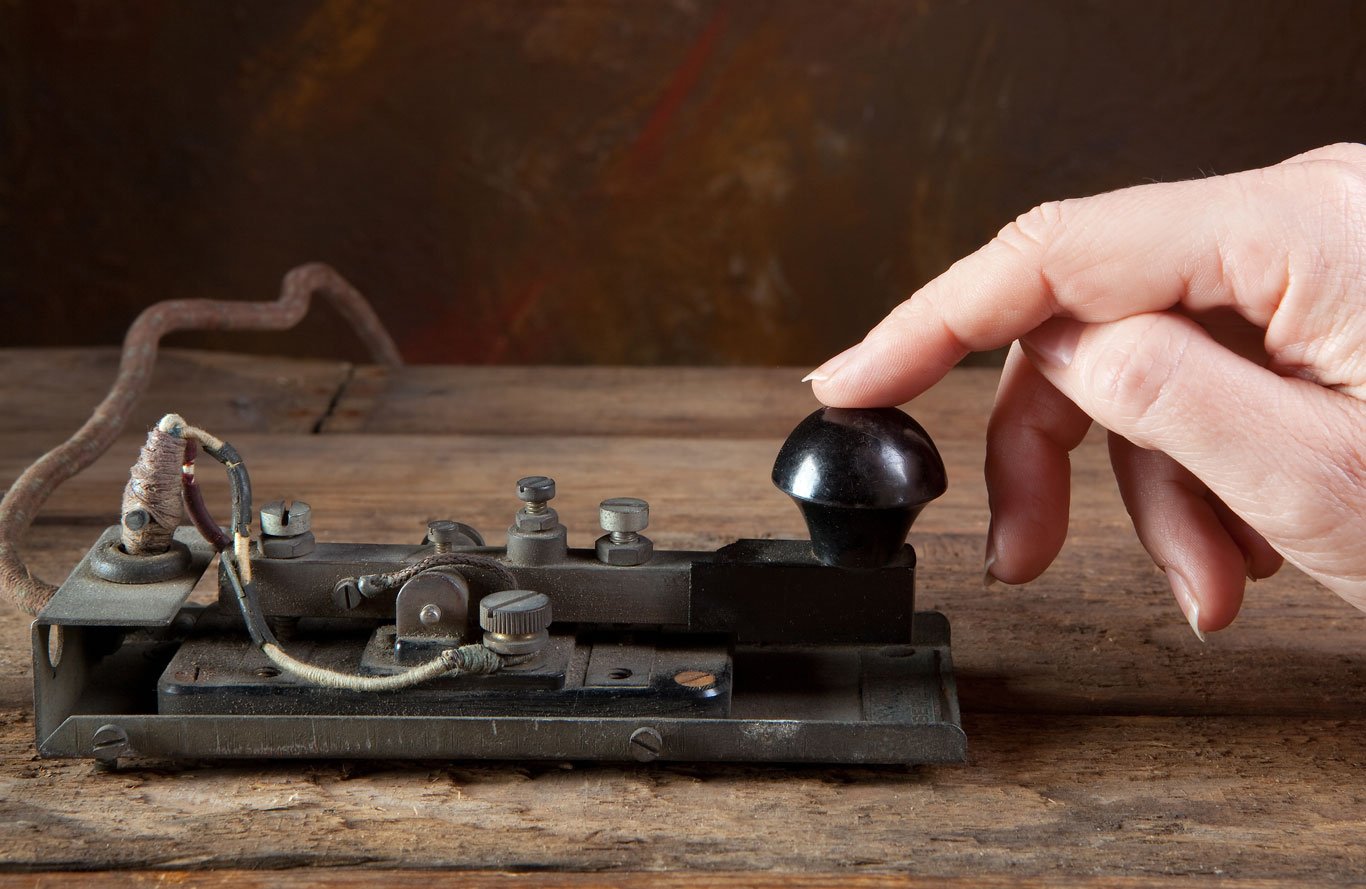 The patent in question was for the liquid transmitter. It isn’t much by today’s standards, but it was the very first concept of an electromagnetic microphone and speaker. Check out this video for a demonstration of the process as well as instructions on how to make your own liquid transmitter. While the device worked as intended, the user had to stare down into a funnel and yell. And phone calls sounded like creepy electronic voice phenomenon recordings.

One year after Bell won the patent for the telephone, he worked with Emile Berliner, a German emigrant, to invent the carbon-button microphone (Wired.com). While this wasn’t a telephone as we know it, this version finally enabled people to understand each other without needing to yell. This technology also opened the way to sound amplification, which enabled long-distance calls (OneTubeRadio.com).

The first phones more like our modern versions were simply a speaker and a mic. There were no buttons or dials. Calling someone meant having a human switchboard operator patch your call. 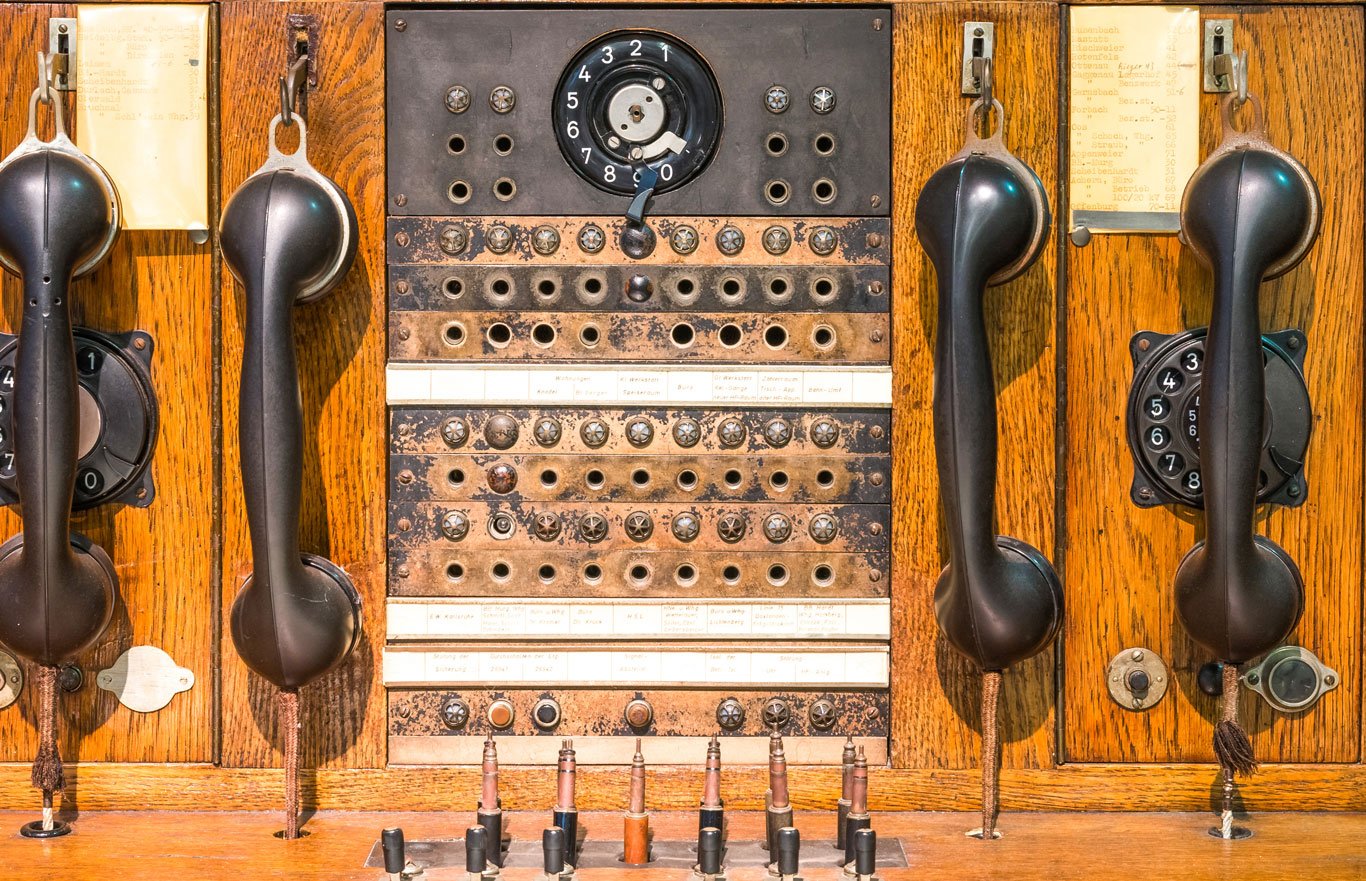 Around 1888, Almon Brown Strowger, a mortician in Kansas City, was losing business because a switchboard operator was routing Strowger’s customers to her own husband, a competing mortician. So, Strowger did what any mortician would have done; he created the first dialing, automatically switching rotary phone (Slate.com). Despite his innovation, the country continued to use switchboard infrastructure throughout much of the 20th century (CultureXchange1.wordpress.com).

Cutting the Cord and Pushing Buttons

In the early 1960s, there was burgeoning research on radio communication in the public sphere. George Sweigert, an early pioneer in this technology, patented the first cordless phone, also known as the full duplex communications apparatus, that connected to a telephone handset. At the time, AT&T (Bell Systems) limited all devices on their communications infrastructure to their proprietary equipment. Sweigert among others were essential in convincing the FCC to reverse this policy (Nytimes.com). 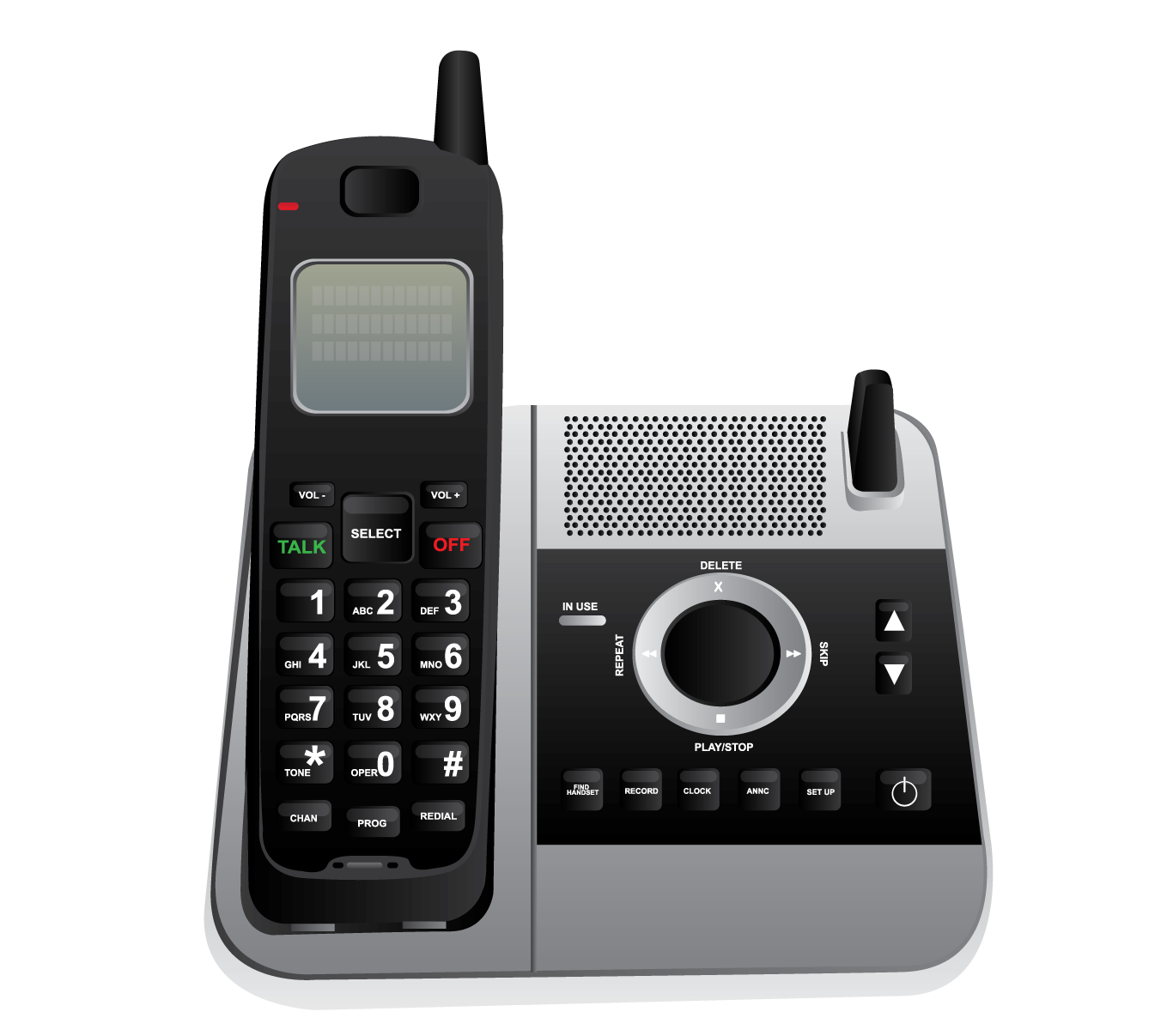 About the same time cordless telephones were being developed, Bell Systems began implementing dual-tone multi-frequency (DTMF) technology, better known as the touch-tone. With DTMF, two tones are generated with the push of a button. The use of DTMF and push-button phones gained traction with the general public in the 1980s and replaced the use of rotary phones. DTMF phones also introduced telephony functions such as call waiting, three-way calling, and credit card payment by phone (Syntec.co.uk).

Today, you might hear people making fun of flip phones. And yet, I still remember how awesome the “Matrix phone” was in the 1990s. Back then, we poked fun at the brick phone. Forget about screen size or whether you could play apps. The Brick, aka Motorola DynaTAC 8000X, was released to market in 1984. It weighed nearly two pounds, had a battery life of 30 minutes, and retailed at $4,000! 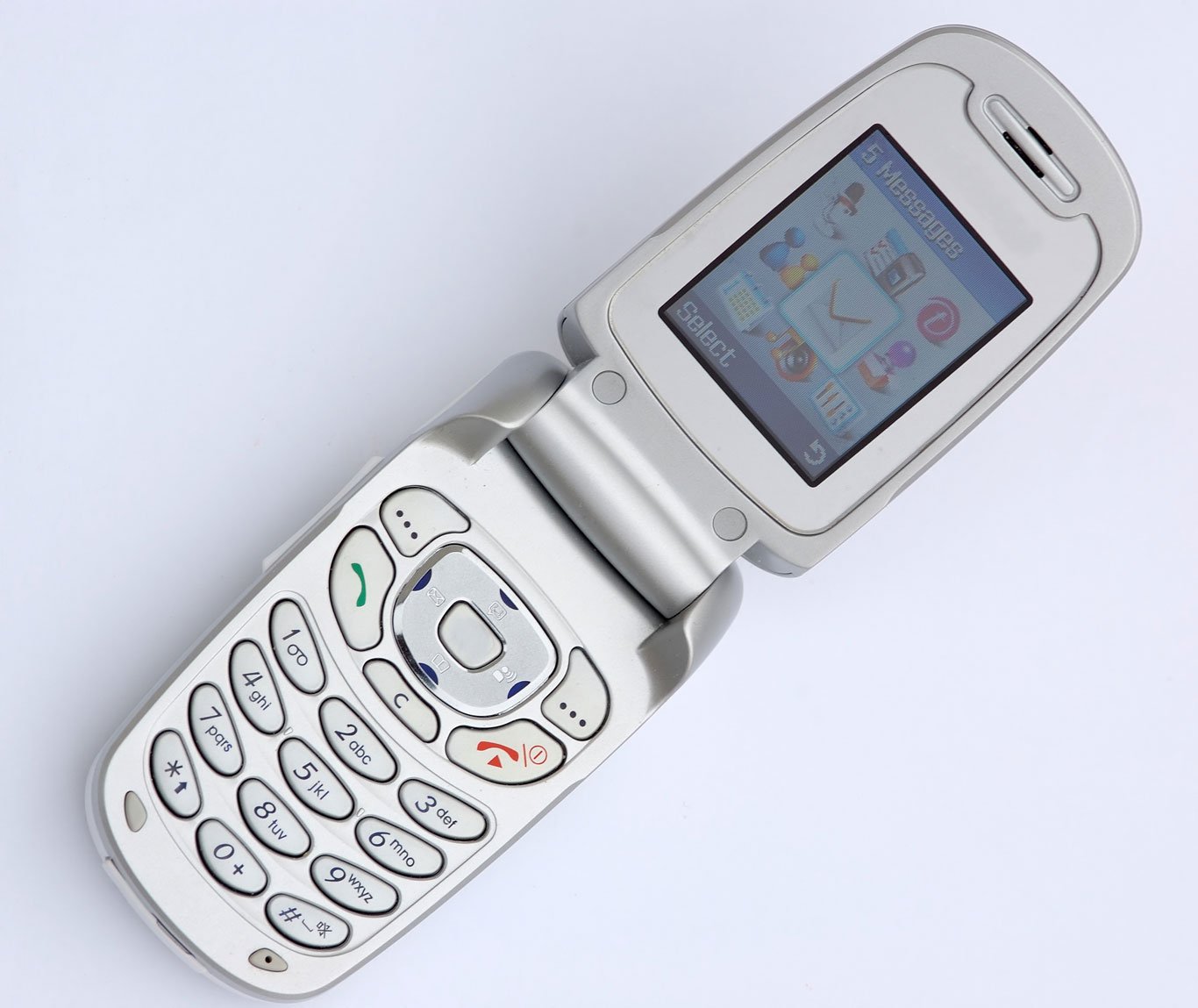 In the mid-90s, Motorola released the Lingo mobile phone, which had a digital radio system and an LCD text-display. Nokia released its iconic 3310 in 1999, which showcased a graphical, 84 x 84 pixel, monochrome screen. You could even play games on it (Amny.com)!

A smartphone is distinguished from its predecessors because of the multidimensional communication: emails, texts (thanks to the pager), photos, and so on. The first smartphone was developed by IBM. The Simon Personal Communicator hit the market in 1994 at $1,100. With its monochrome LCD touch screen, it looked more like a PalmPilot than anything. In addition to voice calls, it featured email, address books, fax, and various other apps. BlackBerry was also another major industry player (Textrequest.com). 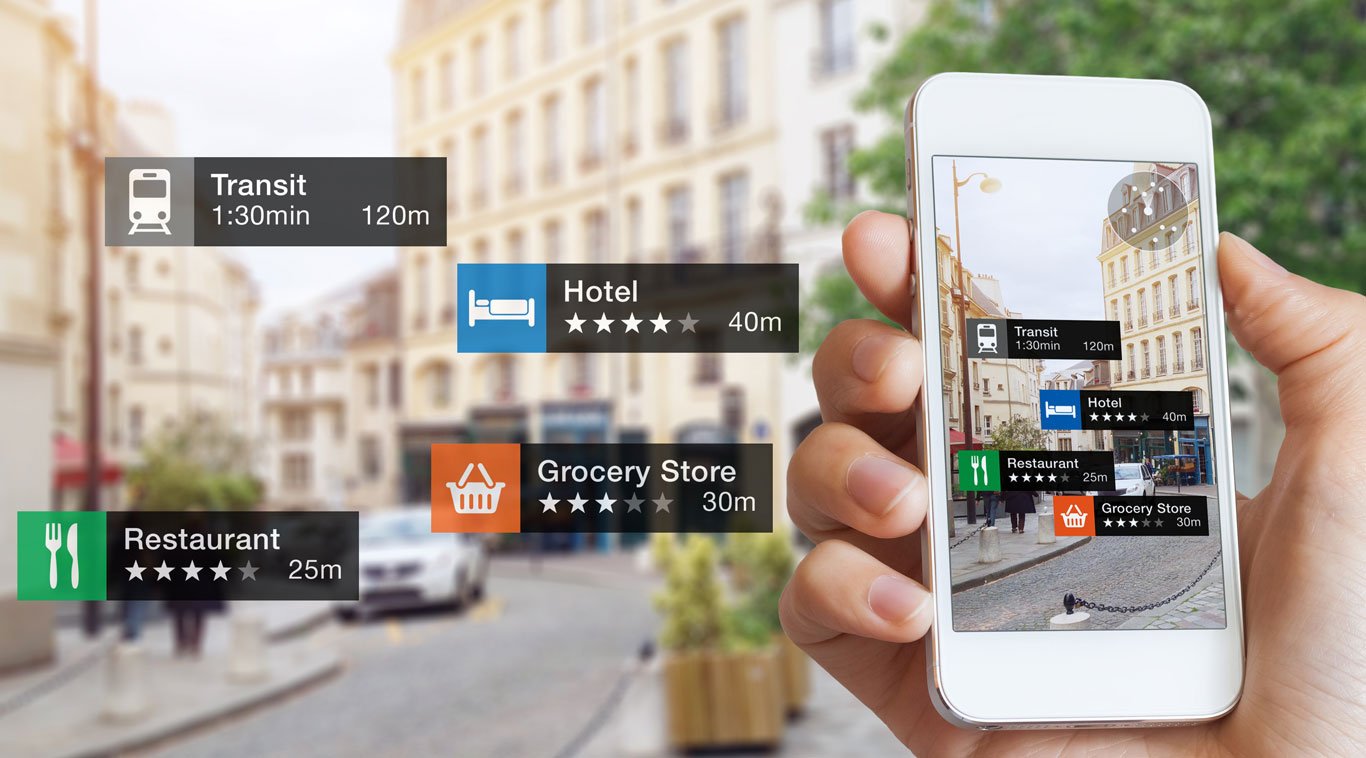 Throughout the mid- to late-90s, another revolution was happening. LCD monitors replaced CRT or tube monitors – remember those behemoths? This translated to higher-quality displays and lower prices. Around Y2K, Microsoft introduced its full-color Windows tablet (Businessinsider.com). These developments played a big role in the design of Apple’s first-generation iPhone in 2007, which popularly merged the tablet experience with the mobile phone (Amny.com).

Today, our phones order pizza, hail cabs, take pictures, and keep us connected to one another. Consider how they would’ve changed history. Pheidippides’s nearly 300-mile round trip could have been an emoji text instead: ⚔️🙏; and his 25-mile run to Athens: ✌️.

What do you think the next evolution in telephones will be?

Telephone changed the way we interact, including our language. Prior to the phone, “hello” wasn’t an official greeting. It was an attention-getting word, like “hark!” or “hey!” Thomas Edison thought “hello” would be a fitting greeting for phone etiquette (Npr.com); on the other hand, Alexander Graham Bell preferred “ahoy!”, which was a similar attention-getting word. The term “goodbye,” also a big part of phone etiquette, owes its etymology to a 16th-century English writer whose mention of it likely was a transformation of “God be with ye” (Todayifoundout.com).

And lastly, did you know that there’s a universally recognized Unicode Emoji Subcommittee whose responsibility is to address the dire issues surrounding these cute icons (Unicode.org, Wired.com)? 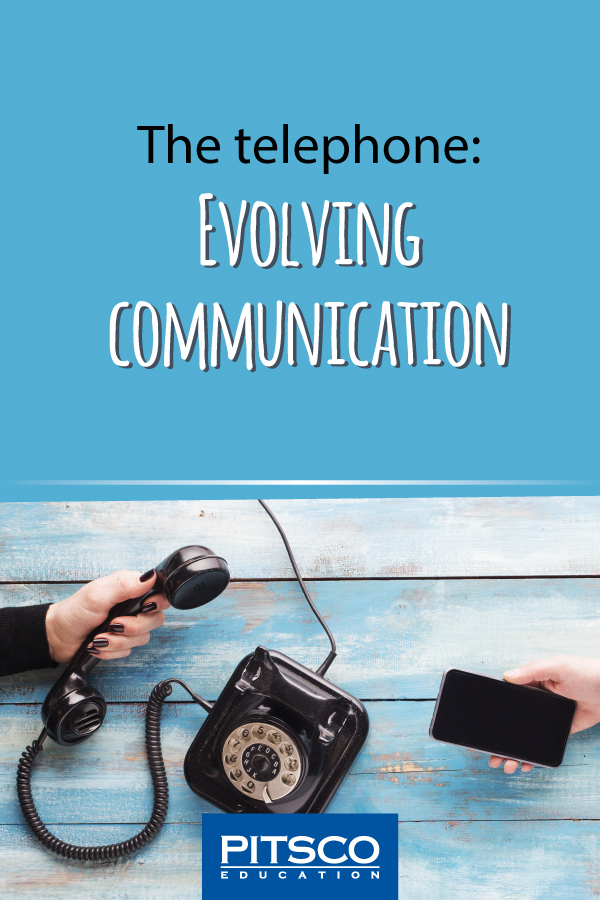