The science of the Winter Olympics

The 2018 Winter Olympics are here! And we’re treated to the best international competition that winter sports have to offer. While the marvel of watching thousands of athletes in peak physical condition compete is the main attraction, often the science perfected for each event goes underappreciated. Events such as bobsledding, ski jumping, and more all require a strong understanding of different physics concepts to be a top competitor.

There’s a lot more behind bobsledding than four people hopping in a sled for an afternoon ride. Bobsledders use precise movements and a solid understanding of physics to maximize velocity as the sled speeds down the track. Every action they perform during the push-off phase and the sled phase is important.

The push-off phase is the 50-meter distance at the beginning of the race where the team pushes and then hops in the sled. This 50-meter stretch is the only chance the team members have to generate momentum. Generally a bobsled team is composed of exceptionally superior male and female athletes. For instance, the four USA men who won gold at the 2010 Olympics were two military servicemen, a former Nebraska football player, and a college decathlete. You want large and strong athletes who can push the sled with as much force as possible, but they also have to have some grace. 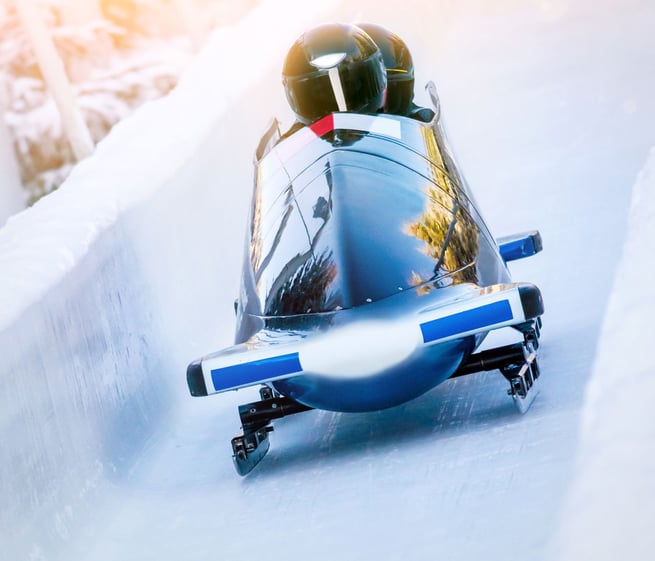 After creating the initial acceleration for the sled, the team hops into the sled in tightly choreographed succession while trying to keep the sled steady and straight. Any slight movement could move the sled back and forth and slow it down. After the team hops into the sled, gravity is in full control. The force of gravity accelerates all bobsleds down the track at the same rate. So one of the best ways the sled team can affect its runtime is by minimizing the effects of two forces: drag and friction.

Everything about a bobsled is designed to reduce drag, from the smooth body to the way the team tucks into formation while racing. The less available surface area for resistance against the sled, the less drag there will be. As for reducing friction, it comes down to finding the perfect line down the track and reacting to the curves. The driver tries to guide the sled down the track in a way that avoids walls but also doesn’t go too high on curves, which would cause the team to travel a slightly farther distance. Any slight disturbance or bump could cause the team to lose momentum that they cannot get back.

Bobsledding is an intense balancing act of trying to reduce the forces acting against the sled while maintaining momentum through the whole race. The understanding of physics concepts such as drag, acceleration, friction, and more are all required to be a top competitor.

If you want to catch all of the bobsledding action that begins this Thursday, NBC will be airing this event on Sunday! Competition in this event ends on February 25.

Sometimes it can look like ski jumpers are legitimately flying. They speed down a snow-covered ramp faster than 60 mph, jump off the edge, and launch into the air to land more than two football fields away from the start. The whole process can seem easy, but like bobsledding, ski jumping requires a firm grasp of physics concepts such as drag, gravity, and lift.

There are two main positions for ski jumpers: one for coming down the ramp and one for gliding through the air. These positions try to achieve very different goals. The first is to maximize the amount of speed before takeoff, and the second is to maximize the effect of air. 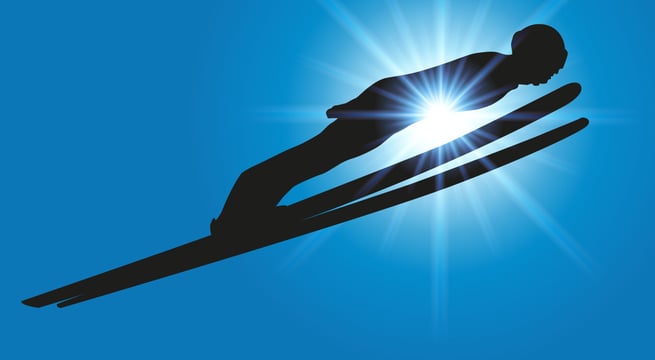 As jumpers speed down the ramp, gravity forces them down, and the air around them creates resistance, or drag. The takeoff position is designed to minimize the effects of drag. Jumpers squat low with their chest parallel to the snow, head down, and arms behind them. This position is held for the duration of the ramp up until the actual point of takeoff where jumpers leap and drastically readjust.

While in the air, jumpers reposition to harness lift, the upward force that helps them glide through the air. Imagine lift as the effect on your hand when you place it outside the window of a moving car. If you angle your fingers upward, you feel a very strong push that lifts your hand upward. The same thing happens when a jumper repositions in the air and makes a V with their skis. This V shape gives the air a wider surface to act on, and as lift is applied to the skis and the rest of the body, jumpers glide farther through the air.

Without the knowledge of gravity, drag, or lift, ski jumpers wouldn’t jump nearly as far. As a matter of fact, ski jumpers used to not make the V formation with their skis. It wasn’t until after jumpers figured out they could get more lift with the V that it became commonplace.

The ski jumping is already in action in PyeongChang, but you still have time to catch most of the finals, which conclude on February 19.

These are just two of the events in the 2018 Winter Olympics that require knowledge of physics for success. Science is everywhere in the winter events. To learn even more about the science behind the Winter Olympics, visit NBC Learn.

To explore ways to bring the Olympics into your classroom, check out these resources.

And to discover ways to bring force, motion, and other physical science concepts to the classroom, no matter the season, visit Pitsco.com.