Gaming in the classroom?

Ever since the early 1980s, a short, mustache-toting plumber has been one of the most recognizable characters in the world. He’s not really known for his plumbing skills; he’s better known for his insane vertical leap and penchant for rescuing a certain princess who can’t stay out of harm’s way. Yes, I’m talking about Mario. March 10 is National Mario Day. So it seems fitting to consider the positive aspects that games, such as those in the Mario franchise, can bring to learning, and how Mario could be used in formal education.

Oftentimes, video games get a bad rap. People list the negative aspects and usually dismiss the plethora of positives. A cursory search of video games and education on Google brings up decades of research on the positives. When you look at the specifics of Mario-based games, there are six elements that students learn without even realizing it:

Mario games are mostly variations of problem-solving and reflex tests that force the player to figure out the best way to finish a level. Level design and ways to complete each level become more complex the further players advance in the game, but the goal remains similar. Gameplay in Mario falls under the category of platforming, which is one of the simplest forms of game design. Genres such as real-time strategy games, simulations, multiplayer games take the learning elements from Mario and amplify them to even greater heights.

Mario in the Classroom

While not all games are a good fit for the classroom, the Wii U game Super Mario Maker would be a great starting point for learning design elements. Super Mario Maker allows players to take the basic building elements that make a level in Mario and create their own level. This game implements the touchscreen of the Wii U by letting students drag and drop objects into a level, and then it quickly switches from building to playing. Think of it as a virtual makerspace.

Students can learn the basics of level design and start to think about the strategy and creativity that go into creating the games while getting to enjoy classic Mario platforming of their own creation. Nintendo even used it for an educational session in San Francisco a few years ago at a public library. At the session, Nintendo aimed to encourage students on the path from consumers to creators.

If you’re looking to introduce coding with a gaming flair, look at Unity. The developer of the Unity engine has numerous tutorials online and example code for creating a basic platforming game. Schools have begun to implement games like Minecraft to teach kids things such as architecture and coding. These are beginner coding skills that students can learn and easily transfer to robotics and engineering. Students coding a platforming level could be the starting point for students coding their own TETRIX® robot! 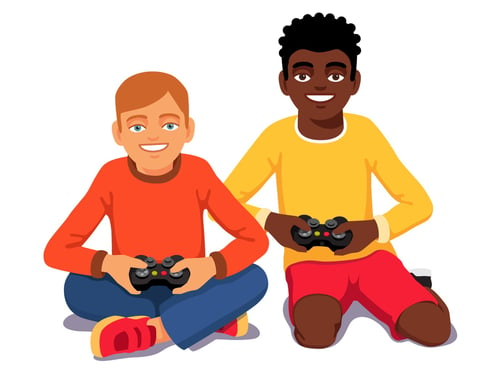 Most people usually don’t associate video games with education, but given games’ ever-growing popularity, it would be remiss to quickly dismiss the possibility. The current generation of students are kids who, as digital natives, have always been exposed to and actively play digital games. Bringing the two together in the classroom can be an incredibly effective way to engage students and help them develop transferable knowledge and skills such as problem-solving to coding. Besides, who wouldn’t want to say they got to learn something from Mario today?