Every student gets a chance to lead

Ah, group projects – the awkwardness of dividing up assignments; the fear that you’ll let your group down (or worse, that you’ll have to do a presentation!); and the certainty that some of you will be doing the bulk of the work while others skate by, receiving the same grade for their minimal effort. I don’t know anyone who escaped school without having to do at least one collaborative project.

Students tend to approach group projects in various ways. The natural-born leaders step up and take charge, doling out assignments and doing the bulk of the presentations. The highly organized students take notes and keep things on task. The bookish types end up doing the research and crafting the message. The quiet students do what they’re told, just hoping to avoid the limelight. And the laid-back students try to get by, doing as little as possible. It’s not a perfect system. It’s how many group projects get done . . . but not all.

At the South Carolina Youth Leadership Academy (YLA) charter school in Pickens, South Carolina, school projects level the playing field, getting students to truly work together. YLA recently piloted Pitsco Math Expeditions, which emphasize collaboration and teamwork as a core part of the learning process. Students work both in pairs and in teams to come up with unique solutions. 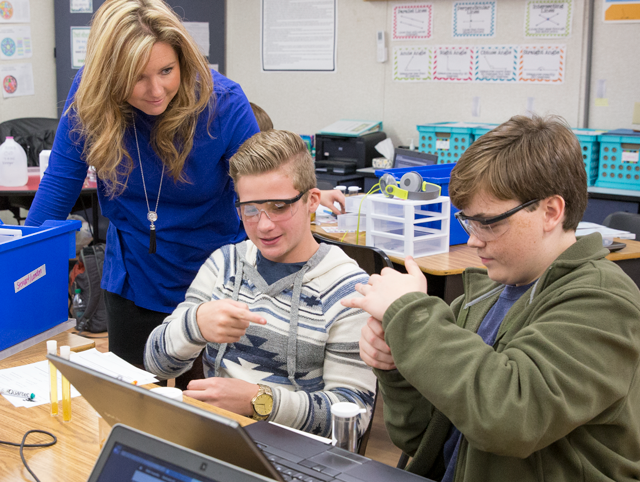 YLA Principal Sandee Blankenship said the way Expeditions approach collaborative learning mimics the real world. “You don’t get to choose in college who you’re partnered with in class. And you can’t have mom or dad just call your boss to say, ‘Hey, can you move their office down? They don’t really like that person.’ . . . Part of leadership is sometimes following and you can’t be the leader in every situation.”

Expeditions push students used to letting others take the reins out of their comfort zones as well. Expeditions encourage each student to come up with his or her own solution to an Essential Question, meaning every student has an opportunity – and an obligation – to fully participate. “It’s pushed our kids who are used to sitting back,” said Blankenship. “Sometimes you have to be the leader. If this is your area, lead!”

The real-world learning inherent in the Math Expeditions fits in perfectly with the reason YLA was created.

YLA Director Patsy Smith, who previously taught fifth grade in a traditional school, learned that some of her former students were disengaging before they even reached high school. “I would run into students in the grocery store a couple years later, and it was, ‘Ms. Smith, I just can’t do it. School is just not fun anymore. Nobody even cares if I do well or not.’”

Smith knew something had to be done to keep these students from becoming high school dropouts. “It’s my belief that most students make their decision to quit school when they’re in middle school,” she explained. “Legally they can’t, but then the high school doesn’t stand a chance. They’re waiting for that day. . . . If we can fix middle school, it’s going to affect the graduation rate. It’s going to affect so many different things if we can just fix middle school.”

After sharing her concerns in a meeting that included a representative from the state department of education, Smith was tasked with creating a plan to reach and reengage middle school students. “Our executive director looked at me and said, ‘OK. Do something.’ Thus, YLA was born.”

The fruits of that meeting – YLA charter – began with a focus on STEM, leadership, health and wellness, and community service. Since then a second charter school – Tall Pines STEM Academy – has opened in Aiken, South Carolina. Smith hopes to have Expeditions at Tall Pines as well. “If we see how successful it is here, I think that would be so easy to transfer there.”