Can your tower withstand an earthquake? 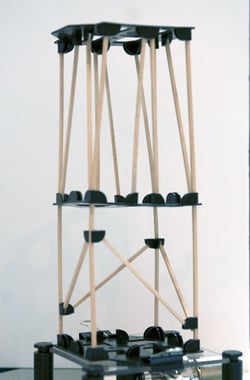 I opened the Tower Prototyping Kit and, after seeing what the kit included, immediately became excited to start building. The kit includes floor plates, connectors, and balsa sticks for students to use to construct a structurally sound tower and then test its strength using the myQuake miniSystem, a system that replicates earthquake tremors. The process of making the tower is simple, yet it still requires critical thinking and experimentation. It's a great way to incorporate STEM into lesson plans with the addition of a fun activity.

In the Tower Prototyping Activity, students will learn about resonant frequencies, sensor measurement, and data analysis through the step-by-step instructions and the application to real-world circumstances.

To construct the tower, I cut the balsa sticks to the desired length and placed them into the floor plates. The connectors were used to add stability and strength to the tower and to provide the proper angle between pieces. One thing that I loved about this activity is that there’s no need for glue. The floor plates and connectors act as a glue-free way to connect the balsa sticks. They also make the tower testable immediately after construction and eliminate the time it would normally take waiting for the glue to dry. And let’s not forget about avoiding the mess by eliminating glue.

After the tower is constructed, the myQuake miniSystem can be used to measure the acceleration for the different axis of the tower. Clamp the tower to the miniSystem, which controls the motion and force applied. If the tower doesn't collapse, rotate the tower and try again. Play around with the different settings and speeds and pay attention to the tower’s movements – is it bending, shaking, or vibrating? It's easy to get an object to vibrate at its resonant frequencies but hard to get it to vibrate at other frequencies. If the tower is still standing after trying each axis and applying the maximum force, you've built a structurally sound tower.

This activity is quick and easy to teach while still covering a wide variety of information, and it provides for creativity, as each student will design his or her own unique tower. Building and testing towers is an exciting classroom activity. Personally, I learned a lot from building and testing my tower, and it was a fun way to learn about resonant frequencies, sensor measurement, and data analysis.

Anyone that knows me well knows I love to ask questions and get excited about learning. So, it’s been awesome throughout the last 12+ years with Pitsco to have so many opportunities to ask educators questions online and in their classrooms and learn from them. But, I have to say, my favorite part is witnessing the students’ “aha!” moments using the hands-on approach. Being a crafter – I’d love to be on "Flea Market Flip!" – I can relate. Now, if there were just a few more hours in the day for my digital projects, gardening, beekeeping, running, and what I call puppy time!